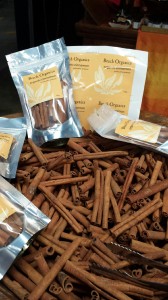 Honey Lady Cinnamon Honey is our best seller when it comes to our spice blended range. If ever someone is unsure about trying one of our flavoured honeys it is the one that I go to. It tastes just like a Cinnamon Donut – without the deep frying!

Honey Lady Cinnamon Honey can be used for many things. Here are some suggestions to get you started:

Honey Lady Cinnamon Honey is available in 200g, 325g & 700g jars and can be ordered at the Honey Lady Online Store or from one of our fantastic Honey Lady Stockists.

Our Cinnamon is all organic and is sourced from Beach Organics in South Australia.

Cinnamon has a long history of use in Ayurvedic, Chinese and Western herbal medicine. Though these herbal traditions use different types of Cinnamon, the medicinal effects are similar. Aromatic and warming, this spice can ease digestive discomfort – it improves poor appetite, aids digestion and can help to reduce bloating, cramping and flatulence. Cinnamon has an anti fungal action and may therefore be helpful for those with imbalanced digestive flora. There is evidence to suggest that Cinnamon improves the insulin resistance associated with metabolic syndrome1. A welcome friend in the winter months, Cinnamon stimulates the circulation, warming chilly fingers and toes, whilst it’s anti microbial activity is beneficial during the season of coughs and colds.

People with Diabetes should exercise caution and seek advice from their health care practitioner regarding honey consumption.

This message is only visible to admins.